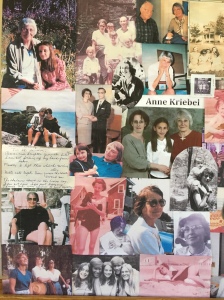 A few months ago, a reader asked me why I had posted a tribute to my friend Jonathan on the anniversary of his death.  “It’s a food blog,” he said.  “I don’t think it’s appropriate to write about personal things on a food blog.”  When I pointed out that our tagline is “Life. With Food” he still wasn’t convinced.  So maybe we need to be clearer that this isn’t only a place for recipes and where we can delight in and show off our cooking accomplishments.  It’s also where we shine a light onto many other things that matter to us.

I grew up in New Jersey in the 1950s and 60s, in a pretty ordinary small town notable only by its proximity to the Delaware River, just two blocks from our house, and an easy drive to Philadelphia, our nearest big city.  We sometimes caught big ugly catfish in the river, but never ate them—even then, the water was brown with sludge and who knows what else.

I don’t think I knew any men—any dads—who cooked, although they would sometimes, on firefly lit summer nights, handle steaks and burgers on the backyard brick grills that they had built themselves.

Our moms did the cooking, and it was about what you would expect in suburban New Jersey in those days.  Breakfast:  cold cereal, milk, toast (white bread), orange juice.  Eggs and waffles or pancakes on the weekends.  Lunch—which I walked home for, from school, since moms didn’t work outside the home those days:  Campbell’s cream of tomato soup, peanut butter and grape jelly sandwiches (white bread) or grilled Velveeta cheese on white bread.  Supper:  spaghetti and meatballs (that was the only pasta I knew), or hot dogs and beans, sometimes fishsticks dipped in ketchup. Chicken cutlets.  I remember eating, but hating, spinach (which for some reason was seasoned with sugar) and summer squash, both watery on the plate.  Mashed potatoes.  Sloppy joes.   Jello or ice cream for dessert.

After my father died and my mother remarried, we moved to a small family farm nearby.  I had of course known in the abstract that food didn’t grow in the supermarket, but it was the farm that really brought fresh tastes home to me.  A peach picked warm from a tree in the late summer, cherries and strawberries and tomatoes and corn and, to me, the most exotic of all, asparagus and lima beans, minutes from plant to table.  I even started to like squash.

My mom’s cooking branched out, too.  She had a small vegetable garden and, for the first time ever, I tasted lettuce that wasn’t iceberg.  She began to keep bees and collect the honey—and was on call to deal with bee swarms all over our part of the state.  She experimented with recipes and turned from an average cook into a very good one.  She sometimes said that the reason she gave up smoking, after decades, wasn’t for her lungs—it was for her taste buds.

When I was about 17, just new in college, I started cooking too.  Vegetarian and macrobiotic, no surprise, it was the early 1970s—and although I eventually moved away from cooking as dogma, I retained my knife skills and the deep belief that food prepared with love would be received with love.

I eventually got married, and had a daughter and a husband who was an excellent cook.  Lots of guys were cooking by the time I reached my late 20s.  My mother and stepfather moved to the town next door, so they could share in the work and wonder of raising their granddaughter.  By this time we were in Massachusetts, just outside Boston, and there wasn’t an ingredient from any part of the world that we couldn’t get if we wanted it.

My mom didn’t know it for a long time, but she was an adventurer.  She was passionate about equality and justice, and questioned authority all her life.  She was a joiner, a change agent, a mentor, and a loyal friend.  We argued, of course, but only a handful of times, and we made up easily.

As my mother pulled into her late 80s, she lost interest in cooking, but not in good food.  So I, and her friends, filled her freezer with easy-to-prepare meals and joined her as she ate them.  She was strongly independent and equally sociable, so she usually had company every day, or went out to see her friends.

About a year and a half ago, my mom, who had been old in years but not in energy or spirit, started to experience fatigue.  For a young old person, this was a big shock.  There didn’t seem to be a medical reason for her tiredness—she was just fading.  She hated having to ask for help—a trait I share with her.  On January 2nd, her 90th birthday, she went into the hospital with pneumonia and then into a nursing home.  She was surrounded by friends from her Quaker community, and by her extended blended family, and, most frequently, by me.

In the months before her death in July, my mom lost her appetite.  She and I both knew that choosing not to eat was making the choice to die, and she was certain that she was ready to go.  My job was to support her, and by the time she died, which took much longer than she wanted it to, we had no unfinished business, nothing left to say.  The last thing she ate was a spoonful of lemon sherbet; the last thing she drank was a sip of lukewarm tea.  Our final conversation was about how much we would miss each other, and about death as the greatest mystery of life, and what would happen to Don Draper of “Mad Men” as he aged.  I believe her last words to me were, “Can you hand me a tissue?”

This isn’t a food blog.  It’s not just about meals and recipes, but what we learn about life and ourselves and each other when we prepare and eat food with and for the people we care about. Food is the thread, life is the theme. 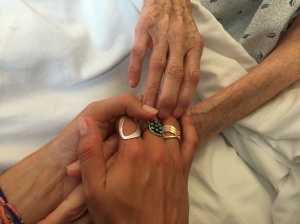